All good things must come to an end. After almost four months of relatively quiescent weather, the 2014 tornado season kicked off quickly and tragically over the weekend.

Only two days later, on Sunday, April 27th, an outbreak of severe storms spawned multiple tornadoes that killed 16 people in Oklahoma and Arkansas. The most substantial damage occurred in central Arkansas, where an 80-mile-long path of destruction swept through northern Little Rock, leaving damage reportedly indicative of an EF3 or stronger tornado. The same slow-moving severe weather system hammered Mississippi, Alabama, and Tennessee on Monday and is expected to continue bringing dangerous weather, including the possibility of strong tornadoes, to the southeastern US through at least Wednesday.

Although intense tornadoes are relatively rare, accounting for approximately 5% of all tornadoes nationally, they are responsible for a disproportionate 75% of all tornado fatalities (statistics for North Carolina). While each tornado fatality is tragic, tornado deaths have been generally declining in the US since the 1920’s, with an average of 80 people killed each year by tornado activity.

Although the majority of tornado damage and fatalities are attributable to rare intense tornadoes, even much more common weak tornadoes and severe straight-line winds can cause substantial damage to property, felling trees, removing shingles and siding from homes, and flinging debris into structures and vehicles. Most homeowners insurance covers storm damage, including damage caused by wind, hail, lightning, debris, and falling trees. One notable coverage exception found in almost all insurance policies, however, is storm-induced flooding, including street flooding, storm surge, and areal flooding due to rising rivers, streams, and creeks. For such coverage, a separate flood insurance policy is required.

In some cases, though, street flooding is caused not by an exceptional storm (i.e. an “act of God”) but rather by an insufficient storm water drainage system. In such instances, liability for damages may rest with the planning or maintenance authority responsible for the storm water system, rather than with the homeowner.

If a neighborhood or section of a neighborhood regularly floods, even during normal, everyday storms, the drainage system may be deficient. A forensic meteorological analysis (like this one from BSMS) of known storm events that led to street flooding, considered in the context of the local rainfall climatology, can reveal whether the drainage system was adequately designed and maintained to handle foreseeable events.

In addition to flood damage, homeowners insurance will not cover damage caused by a lack of proper maintenance. Occasionally, negligence may be suspected as a contributing factor to storm damage, leading to a denial of claim, even when it is not immediately clear whether damage would have still occurred with proper maintenance.

For instance, if a tree falls during a storm and is later found to be rotten, the insurer may deny the homeowner’s claim, insisting instead that negligence on the owner’s part (failing to remove a rotten tree) caused the tree to fall, rather than the storm. Such insurance disputes can lead to nasty legal battles. Investigation as to whether the homeowner knew or suspected that the tree was rotten (i.e. whether he or she was on notice), examination of other damage throughout the area (did healthy trees of a similar size fall nearby during the same storm?), as well as a forensic meteorological analysis (were wind speeds with the storm sufficient to fell a healthy tree of that size? did heavy rainfall and saturated soils reduce the root stability of the tree?) can greatly assist in determining the ultimate cause of the damage and thereby assist in settling such disputes.

So, the bottom line is this: storm season is here, and after a late start, it appears to be making up for lost time (at least at the moment). Extreme weather, which includes severe local storms as well as tropical cyclones, droughts, heat waves, areal flooding, wildfires, and winter storms, causes tens to hundreds of billions of dollars in damage annually in the US. 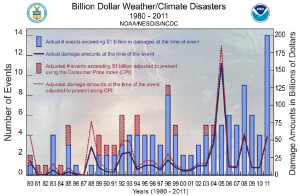 Severe local storms are, on average, responsible for more than 10% of all damages, with tropical cyclones and droughts/heat waves responsible for nearly 50% and 25%, respectively. While severe local storms are not responsible for the largest percentage of damage costs, they do represent the most common/frequent type of extreme weather experienced in the United States, and almost everyone, at some point, will experience storm damage. Make sure you understand your property insurance policy, including any exceptions, and take care of any nagging maintenance issues (like rotten trees or loose roof shingles) that could jeopardize a storm-related insurance claim.

In the event that you do find yourself in a weather-related insurance or legal dispute, whether as the insured or the insurer, the plaintiff or the defendant, do not hesitate to contact Blue Skies Meteorological Services. We will gladly provide a complimentary consultation to discuss how a forensic meteorological analysis could determine the role that the weather played in your case and how such an analysis could facilitate an advantageous resolution of the dispute.