Well, El Niño is looking more and more likely during summer and fall of 2014!

As we mentioned back in February, both traditional El Niño Southern Oscillation (ENSO) indicators as well as a new statistical forecasting technique that utilizes Pacific air temperatures are suggesting possible El Niño conditions by later this year.

During the first week of March, the Climate Prediction Center issued an El Niño Watch, suggesting a moderate (50%) likelihood that warmer than average sea surface temperatures (SSTs) will develop in the eastern equatorial Pacific Ocean by the summer or fall of this year. ENSO is arguably the most important driver of interannual climate variability across the globe, strongly affecting both temperature and precipitation patterns. Here in the US, El Niño is most strongly felt during winter, when it typically brings mild weather to the northern states, wetter weather to the southeastern states, and drier weather to the upper Midwest. For a more in-depth discussion of the causes and impacts of El Niño, please check out NOAA’s Pacific Marine Environmental Laboratory and the Climate Prediction Center.

Because of its large impact on weather, El Niño also has a large impact on national and global economies. From agriculture to fishing, from energy production and demand to home construction, from natural disaster costs to tourism — ENSO directly affects up to 10% of the US economy. Intense El Niño events cost the US economy tens of billions of dollars. Some of that cost is unavoidable, but much of it is not. For that reason, early and accurate forecasts of ENSO conditions are critical.

And there is good news on the forecast front! We mentioned in February that, due to budget cuts, NOAA’s network of buoys dedicated to monitoring equatorial ocean temperatures (and therefore detecting the early signs of El Niño or its opposite condition, La Niña) had degraded to operating at a mere 40% effectiveness. 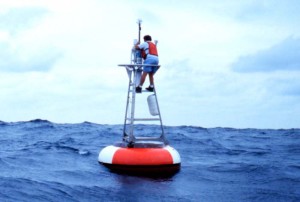 The Tropical Atmospheric Ocean Array (TAO) is about to get some much-needed TLC, according to Bloomberg News and the National Weather Service (NWS). Thanks to some budget relief in 2014, NWS is set to start repairing 70 TAO buoys, bringing the operational capacity of the TAO array up to 80%. This doubling of the current capacity will provide significantly more detail about ocean conditions, which in turn can increase lead-time for El Niño forecasts by several months, thereby allowing weather-sensitive industry to prepare early and thoroughly.