Get above the surge (of claims) – improve the efficiency and accuracy of hurricane-related claims adjusting decisions while reducing the risk of costly litigation by incorporating forensic meteorology in your claims adjusting process.

Hurricane Ian roared ashore in southwestern Florida on September 28, 2022 as a powerful Category 4 storm. Ian produced a catastrophic storm surge along the coast, reported wind gusts up to 140 mph, and a swath of extreme rainfall that led to significant flooding across inland Florida. Hurricane Ian’s impacts were felt across the state of Florida as well as in Georgia, South Carolina, and North Carolina. Ultimately, Hurricane Ian resulted in over 150 fatalities and billions of dollars in property damage in the southeastern U.S.

Almost immediately after landfall, government agencies began collecting and reporting preliminary data related to storm impacts. These data are available now, and although they may continue to undergo quality checks and minor revisions until the final and complete data records are released in coming months, the preliminary data provide robust information about site-specific impacts when analyzed and interpreted by a credentialed meteorologist who understands the provenance, capabilities, and limitations of the data.

A site-specific forensic meteorological analysis of Hurricane Ian’s impacts ensures that claims decisions are defensible and science-based, providing a fair and efficient outcome for both the insured and the insurer that limits the risk of litigation.

The following data are available now for analysis:

Based in Florida, we at Blue Skies experienced this storm firsthand and in real time. Please contact us with any questions you may have about our site-specific Hurricane Ian impacts analyses. Initial consultations are always free. 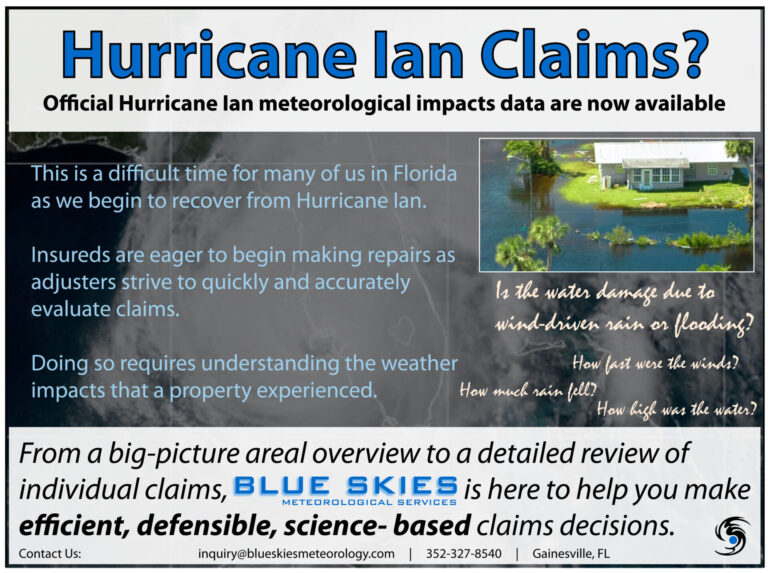